There are two types of sauropod tracks among the set of replica dinosaur tracks being made for us by The University of Queensland Dinosaur Lab.

Unlike the theropod track Megalosauropus broomensis that we featured in our last post, neither of these sauropod tracks have been given a formal scientific name.

The reason for this is that in both cases there is currently insufficient information to clearly distinguish these tracks from other named sauropod tracks, both from the Broome Sandstone and from other parts of the world.

Importantly, we don’t have much in the way of trackway data for these types of tracks – we know what individual tracks looked like, but very little about how the trackmakers that made these tracks walked (or ran).

When it comes to sauropod tracks, information about the morphology of tracks (both hand and foot tracks) AND trackway data is needed to confidently assign formal scientific names.

For these reasons, tracks that appear to represent distinct track types but lack a full suite of associated data (either details relating to individual tracks or trackways) are placed in the informal category of ‘morphotype’.

‘Broome sauropod morphotype A’ is a type of track that our palaeontologists would love to name, but at the moment they don’t have enough information to do so.

There are some pretty impressive tracks that can be assigned to this track type – including the largest dinosaur tracks in the world (see previous posts) – but frustratingly no definitive trackways. 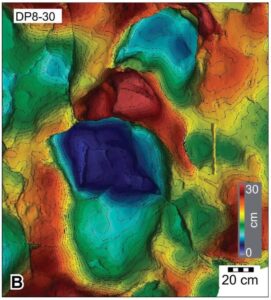 One of the best examples of Broome sauropod morphotype A is UQL-DP8-30, a coupled right hand and foot track.

The pedal (foot) track is ‘pear-’ to ‘keyhole’-shaped, with impressions of the first, second and third toes, and a distinct heel impression.

The much smaller manual (hand) track is oval- to crescent-shaped, with a distinct, inwardly directed pollex (thumb claw) impression.

This is a colour ramp image of the track, created from 3D digital model.

A, orthophotograph; B, ambient occlusion image; and C, schematic interpretation of UQL-DP8-30.

This pair of tracks is probably one of the best-preserved ‘true’ sauropod tracks do far described from the Broome Sandstone; it is deeply impressed, shows a lot of detail about the anatomy of the hand and foot of the trackmaker, and hasn’t eroded much.

The manual-pedal couplet is around 1.8 m long. The 1.9 m long replica will no doubt be the centrepiece of the new DCMG track collection.

The trackmaker that made UQL-DP8-30 is estimated to have been 3.3 meters high at the hip.

3D digital models of dinosaur tracks are relatively easy to handle, but the same can’t always be said of the real thing.

Making a silicon mould of UQL-DP8-30 took Linda Pollard (right), Dr Anthony Romilio (left) and members of the UQ Dino Lab and Goolarabooloo several hours and many, many litres of rapid setting silicon.