It was a shock when we learned of Kevin Smith’s death last week.

In addition to all the other voluntary work Kevin did in the Broome community, he was a keen supporter and member of the DCMG.

Kevin drafted the constitution, registered business and domain names, and everything else that was needed for us to become an incorporated n.f.p. Then, when DCMG Inc. came into existence, he filled the role of Treasurer for a year.

Despite stepping down from any formal role Kevin, continued to be our ‘go-to’ person for financial matters.

He was always on call should we need a photographer to document our activities, and kept his eye on ‘our’ tracks whenever he was out on the beaches.

Sometimes when we find tracks on beaches we ‘name’ them.

These are not scientific names but locational indicators for us; usually the name of the person who ‘first’ spotted the track.

Most of the tracks we find are indentations made by the foot of the dinosaur.

But occasionally, the sediment that filled the indentation comes out and appears as a ‘positive’ (also known as a natural cast).

Positives are pretty rare; there is only a handful that we know of around Broome.

One of our favourite positives is known as ‘Kevin’s track’.

It is frequently under sand, but we know where it is and every now and then we’ll see it and say hello and recall the day Kevin alerted everyone to it and how, whenever we were on the beach looking at it, he would inevitably appear carrying multiple cameras, accompanied by his dog Treva.

We searched our DCMG image library for photos of Kevin. We have lots taken by him but it seems like he was a bit camera shy (like his namesake track).

Thank you to Dianne Bennett for finding one or two in her collection. 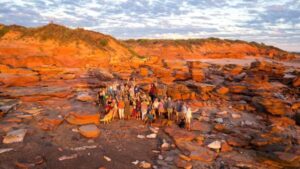 Broome members of the DCMG back in 2016. Kevin, waving, is fourth from the right, wearing his favourite terry-towelling hat. Photo: Shane Thompson. 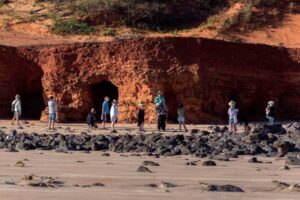 Great shot taken during a recent DCMG excursion. The red cliffs of Reddell Beach put us all in perspective. Photo: Kevin Smith

Kevin was always ready to get as close as possible for the perfect photo. Seagrass monitoring in Roebuck Bay. Photo: Dianne Bennett 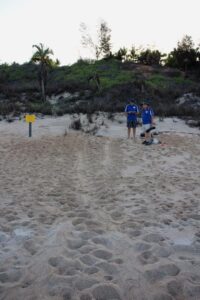 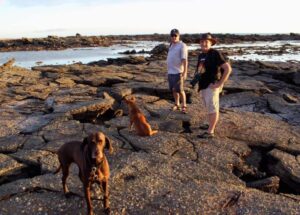