The name of this track honours Louise Middleton, for her lifelong passion for the discovery, documentation, and conservation of dinosaur tracks in the Broome Sandstone.

The ichnogenus was created in 1984 with the description of Wintonopus latomorum, based on tracks from Lark Quarry in Central West Queensland.

Wintonopus latomorum is now also known from the Broome Sandstone based on tracks in the Walmadany area.

Tracks assigned to Wintonopus are thought to have been made by small-bodied ornithopods that walked on two legs.

Ornithopods are the group herbivorous ornithischian dinosaurs that include all the large-bodied duck-billed dinosaurs and the ‘iguanodonts’, such as Belgium’s Iguanodon bernissartensis and Queensland’s Muttaburrasaurus langdoni.

A replica of Wintonopus middletonae is currently being made at the UQ Dino Lab, and will shortly be making its way to Broome.

The DCMG is very grateful to Shire of Broome, LotteryWest and Broome Power Station (EDL) for funding this project. 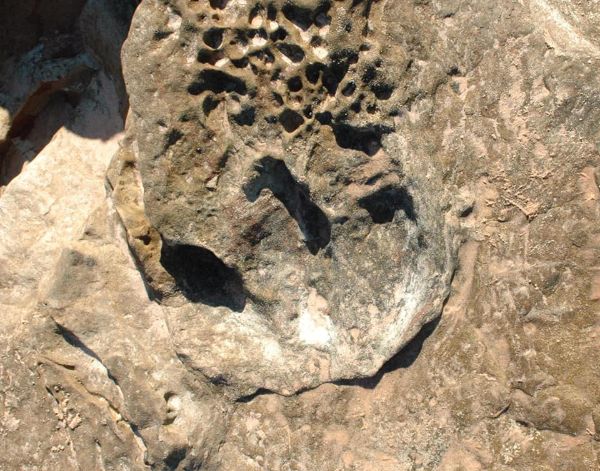 Similar to theropods, ornithopods made three-toed tracks, with the second, third and fourth toes leaving impressions (the first toe, if present, was higher up the rear of the foot, so rarely leaves an impression in a track).

Unlike most theropod tracks, however, the tracks of ornithopods are usually broader than they are long, and the toe impressions often lack the impressions of individual digital pads. Claw impressions are also usually absent.

Tracks assigned to Wintonopus are unusual in that they point to a trackmaker that walked (and ran) with the ‘heel’ part of the foot off the ground.

All dinosaurs walk with an elevated heel; the ankle joint is functionally part of the lower leg.

The rear of the foot that contacts with the ground in most dinosaurs is the joint between the toes and the mid-foot (the metatarsal).

The majority of tracks made by bipedal dinosaurs point to the presence of a pad beneath this part of the foot.

It gives the impression of a true heel, but it isn’t. Wintonopus show now evidence of this false heel pad; the only impressions are those of the toes.

This means that the ornithopods that made these tracks were walking on their toes, with no part of the mid-foot contacting the ground. This type of posture is referred to as ‘subunguligrade’. 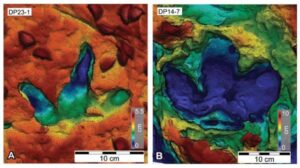 The W. middletonae that is being replicated for the DCMG includes small claw marks at the end of each toe impression.

Most Wintonopus middletonae are around 20–30 cm wide, and were probably made by a trackmaker that had a hip height of around 1 m, or around the same size of a large male red kangaroo.

Wintonopus middletonae are very rare in the Broome Sandstone, indicating that the dinosaurs that made them were not very abundant, at least in the areas where tracks were preserved. 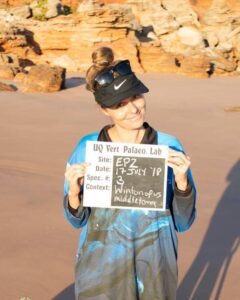 Rani Middleton helping out the UQ Dino Lab with the 2018 documentation of one the tracks named after her aunty.

Rani very much enjoyed sharing this moment with her young son Mateo and partner Nathan. 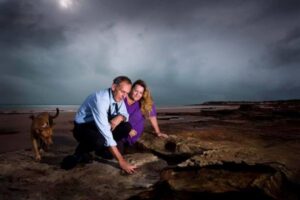 Louise Middleton proudly shows Bob Brown one of the tracks named after her at Entrance Point.